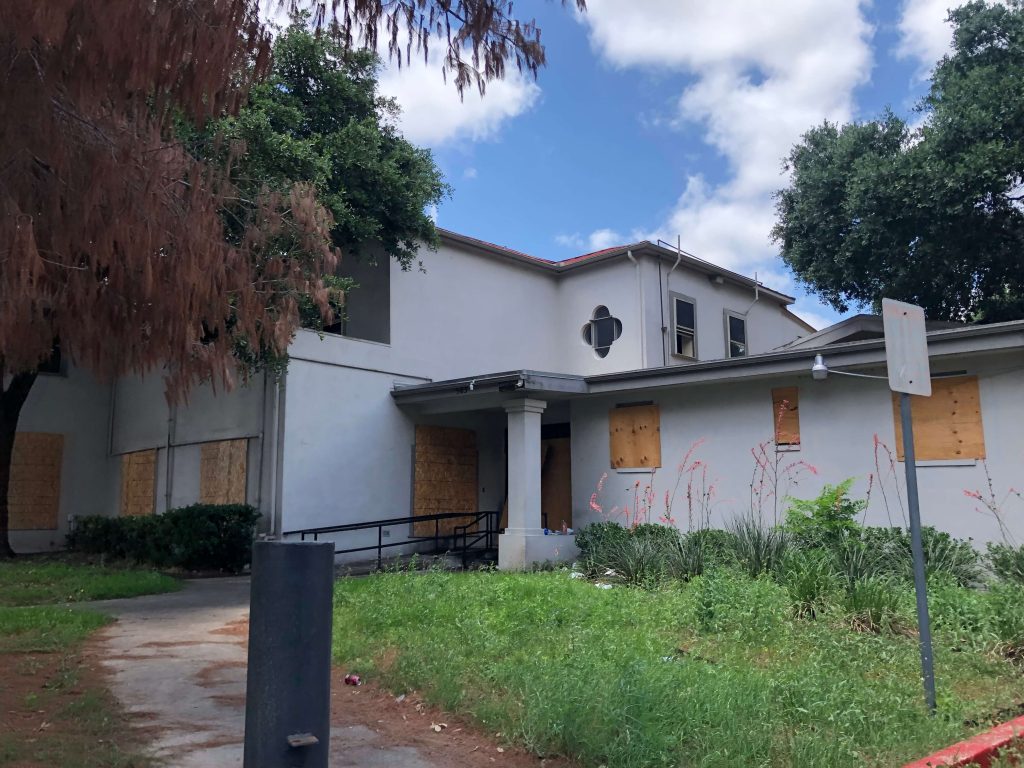 The Conservation Society has joined with the Westside Preservation Alliance and the Esperanza Peace & Justice Center to request a finding of historic significance for the property located at 503 Urban Loop.  The property owner has requested demolition, although it’s not clear what he plans to build back.  Why not a project that would incorporate the most historic buildings within this complex and qualify for tax incentives?

You can help support preservation by calling or e-mailing your City Council member prior to the hearing, which has been rescheduled for Thursday, December 16th.   This template can help you get started.

This property is in District 1, under Councilmember Mario Bravo, but wide support is needed.   Instructions on how to participate in the actual hearing will be posted closer to the actual date.

Why This Building is Significant

The 1883 core of the main building is one of the last links to the famous red light district that once existed within the Laredito neighborhood; an area that became a tourist attraction second only to the Alamo in its heyday.  In 1912, the Catholic Church repurposed the former brothel into an orphanage and day care that served the working class Mexican American neighborhood for the next seventy-five years.

503 Urban Loop is worthy of preservation as a testament to Laredito’s colorful past, to the long tradition of Catholic ministry to the poor and marginalized on the Westside, and to the key figures who helped shape both legacies.  These people include Madam Fannie Porter; San Antonio’s fourth Bishop, the Reverend John W. Shaw; and Reverend Mother Mary Teresa, the founder and superior general of the Carmelite Sisters.

There are relatively few designated landmarks on the Westside that reflect the history of the predominantly working-class Mexican American community.  Buildings representing tangible links to their past have been disproportionately sacrificed to urban renewal and development.  Speak out to change the pattern of cultural erasure.

In order to be eligible for historic landmark designation, properties shall meet at least three (3) of 16 designation criteria . We submit that the property meets the following five criteria, consistent with UDC Sec. 35-607(b):

1. Its value as a visible or archeological reminder of the cultural heritage of the community, or national event; Although not representative of the whole of Laredito, this building serves as a rare, visible reminder that vice and entertainment played a significant role in the area. As later enlarged, the building also serves as an important example of the Catholic Church’s outreach to children, the poor, and immigrants on the Westside. The Carmelite Sisters’ expansion of 503 Urban Loop between 1931 and 1963 testifies to the critical role the Catholic Church played in meeting an underserved community’s needs, both material and spiritual.

3. Its identification with a person or persons who significantly contributed to the development of the community, county, state, or nation; The famous San Antonio bawd Fannie Porter lived and worked at the subject structure from c. 1897 until c. 1901; during that time, Porter hosted members of the Wild Bunch, including Butch Cassidy and the Sundance Kid. No other remaining site in San Antonio is associated with these persons.

6. Its historical, architectural or cultural character as a particularly fine or unique example of a utilitarian structure, including, but not limited to, bridges, acequias, gas stations, transportation shelters, or other commercial structures; it is a surviving example of an orphanage or non-institutional group quarters in Laredito, a neighborhood associated with the city’s Hispanic community since its founding.

7. Its unique location or singular physical characteristics that make it an established or familiar visual feature; Beyond Casa Navarro and a few other structures to the south, almost nothing remains of the Laredito neighborhood in San Antonio. This negation resulted from a long and aggressive pattern of urban renewal, which displaced people, and destroyed homes and businesses, between 1949 the 1970s.

11. It is distinctive in character, interest or value; strongly exemplifies the cultural, economic, social, ethnic or historical heritage of San Antonio, Texas or the United States; 503 Urban Loop relates to the sociocultural and economic activities of working-class labor, including that of Mexican American and African American prostitutes, and the predominantly Euro-American madams of the more luxurious brothels, like Fannie Porter’s. 503 Urban Loop is the last physical tie to an area that also served as a major economic engine for the city. The growth of San Antonio, driven by the railroads and the presence of permanent military bases, created significant consumer demand for prostitution. Under the later management of the Carmelite Sisters, led by Reverend Mother Mary Teresa, 503 Urban Loop played an important role in addressing the needs of poor Mexican American families and children on the Westside. The Archdiocese of San Antonio noted that by 1949, “thousands of children [had] been in the care of the sisters.” Over three-quarters of a century, the former brothel repurposed by Bishop Shaw and the Carmelites became a neighborhood fixture, representative of the organized efforts to improve barrio life that are part of San Antonio’s social and historical heritage.