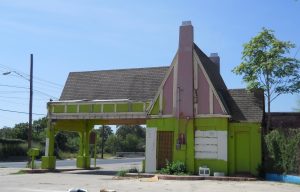 The Conservation Society has been working with several developers interested in purchasing the 1-acre site along San Pedro Creek trail and made a statement in favor of designation to City Council.

The issue at hand is the long-vacant building’s potential for reuse if preserved in place.

We argue that the station’s potential is high, as Executive Director Vince Michael pointed out in his article on re-purposed gas stations in the Rivard Report.  New development is emerging along the Flores and Nogalitos corridors in the station’s vicinity near San Pedro Creek.  In addition, historic designation can qualify the building to receive tax incentives for restoration.

In 2012, the City Council of Geneva, Illinois faced almost the same scenario, involving the owner’s request to demolish a 1930s Pure Oil station. Because Geneva’s council recognized preservation’s importance to their civic identity, their gas station now serves the community as a branch of the Geneva Bank & Trust.

We need your help:

What could the station at 901 S. Nogalitos become for San Antonio?  Show your support for landmark designation by contacting your City Council member – send them the link to this article (https://www.saconservation.org/pure-oil-stations-fate-continued/).  Demand that this treasure be saved from demolition!