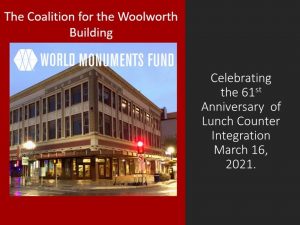 Who were the people that brought about the first peaceful and voluntary integration of the 1960 sit-in movement?  Come find out.  Masks and social distance encouraged.

On February 1, 1960,  African American students peacefully opposed racial segregation by sitting down and requesting service at a Woolworth lunch counter in Greensboro, North Carolina.  Refused service, they kept returning, and  inspired a national movement as other black students across the South followed their example.

San Antonio’s Woolworth on Alamo Plaza was one of seven local stores that desegregated their lunch counters without sit-ins on March 16, 1960.  This peaceful and voluntary action made headlines at a time when other Southern cities responded to student protests with arrests and violence.

A visual chronology of the events that led up to San Antonio’s definitive moment in Civil Rights history on March 16, 1960.